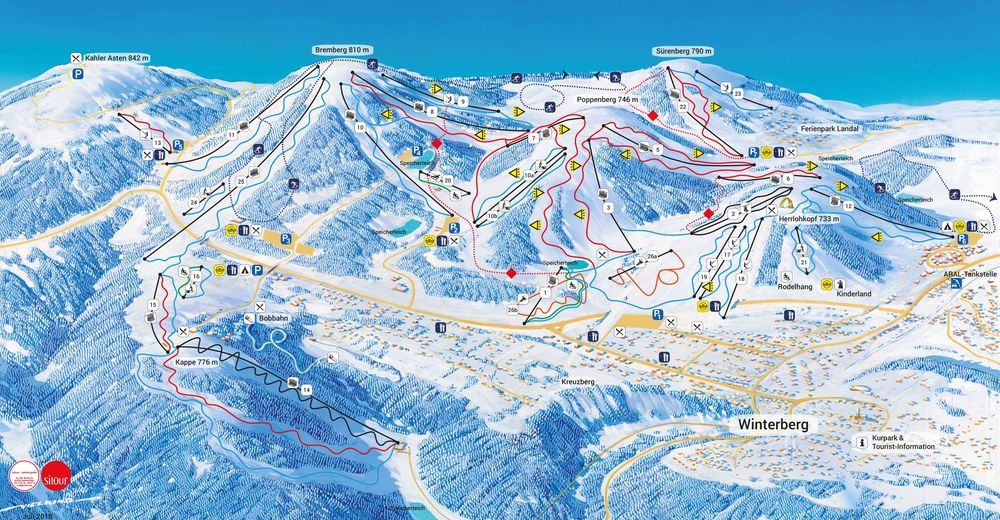 With its 26 lifts and 34 well-groomed runs on seven mountains, the largest ski area in the Wintersport Arena offers snow fun and sport on a grand scale. A large, powerful snow-making system with 370 snow generators makes 28 ski runs and three toboggan runs snow-sure. Ten ski huts invite you to a cosy round.

Comfortable, well-maintained and extremely snow-sure
Not only snowboarders, beginners in winter sports and parents with children will appreciate the twelve chairlifts that take winter sports enthusiasts quickly and safely uphill. Detachable lifts slow down the ride for boarding and disembarking at the stations. Online shopping and contactless passing of the lift barriers with key cards are not only convenient, but also ensure fast, smooth processing.

Great snow fun for the little ones
The two toboggan slopes with toboggan lift are not the only fun for little snow bunnies. Colourful figures, gates and "flying carpets" await them in the children's lands on the Herrloh, on the Snow White Slope and in the Remmes Meadow. There the little ones learn their first turns in a playful way.

Largest lift network north of the Mainlinie:
26 lifts, 14 of which are chairlifts (12 of which are detachable)
6 T-bar lifts and 5 conveyor belts
34 runs on 7 mountains

There is much more to discover and experience in Winterberg. You can book accommodation online at www.winterberg.de or at the tourist information office on phone +49 2981 9250-0.