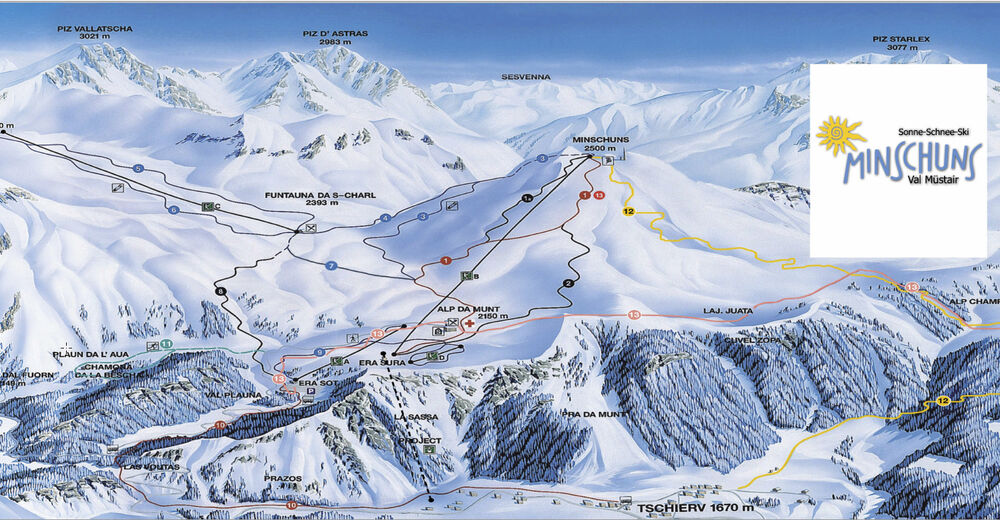 Free public transport throughout the valley
From the 2021/22 winter season, public transport in Val Müstair will be free of charge for overnight guests. This applies to the Postbus routes from Buffalora over the Ofenpass to Müstair, from Fuldera to Lü (start of the toboggan run to Tschierv) and the sports bus from Müstair throughout the valley to the Era Sot ski lift valley station. Links to the >> timetables!

The "Epiphany Race"
The Epiphany Race for snowshoe skiers and backcountry skiers will take place as early as 7 January 2023.

Access to the Val Müstair sports facilities is now "hands-free "* (contactless) with the modern Skidata ticketing system. Owners of a SwissPass can have day, multi-day and weekly tickets loaded onto their card.

The winter sports area at, around and on Minschuns in Val Müstair is a "small and fine" winter El Dorado. It lies at a snow-sure altitude of between 2000 and 2700 metres above sea level and offers three stirrup lifts and a children's ski lift for downhill skiing above the tree line. There are hardly any waiting times here. And Minschuns offers much more!

It is "small and fine" because it is ideally suited for families with children: Inexpensive day tickets, patient ski instructors and a mountain restaurant with inexpensive children's menus. The practice area with the children's lift is directly visible from the terrace. So the adults can watch the youngsters making their first turns. The Minschuns ski area also borders on the Swiss National Park - with a bit of luck, wild animals will show themselves at the edge of the piste and can be observed up close. Snowboarders and carvers will find varied downhill runs in open terrain and groomed pistes of all levels of difficulty between Alp da Munt and the top ski lift station Vallatscha.

Also attractive without skis
The Alp da Munt can also be reached on a well-maintained hiking trail or with snowshoes. There is also a groomed cross-country ski trail. A scenic hiking route to Lü is signposted. The local mountains and the highest peaks of South Tyrol are a constant companion.

Leave your car at home
During the winter season, the ski bus runs three times a day throughout the valley to the ski lift valley station. Your own car is therefore not necessary. The slopes also provide access to two valley runs: one leads to Tschierv and the other to Lü. From here there are additional PostBus connections to all villages. Those who want to return directly from the valley station to their accommodation in the late afternoon can use the ski bus again. This is free of charge.

Key data of the winter sports area at, on and around the Minschuns